Chances are, even as a front-end developer, you’ll stumble upon runtime exceptions at some point if you do any amount of work in Java. You may not be obligated to fix these back-end issues, but having a general understanding of what they are and how to read them is key to being able to maintain effective communication with your internal team and external users.

Before we get too far along, I should make clear that I’m a front-end guy. I live and love HTML, CSS and JavaScript. I’ve only recently begun to work more on the back-end. The following may be somewhat inaccurate. It’s an honest description of Java runtime exceptions from a front-end developer’s perspective. I welcome all corrections and critiques.

Understanding What Runtime Exceptions Are

In my experience, runtime exceptions always occur when a user does something you’d never expect them to do — as users do. Runtime exceptions usually require immediate attention. It signals an error a user is running into that is making it impossible for them to do what they’re trying to do. 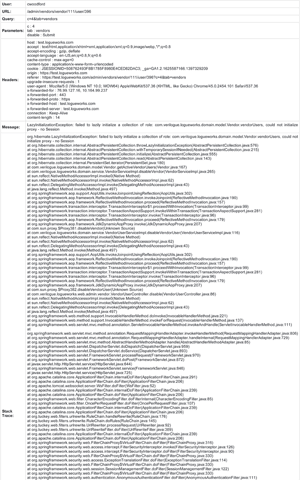 So what does a runtime exception look like? If you’re a front-end developer like me, it’s likely you’ll run into your first exception in the form of an email notification received after running into an error on your test environment that caused your app to stop working. And it could quite possibly be the most intimidating email you’ve ever received. Here’s an example of what an exception email looks like coming from an enterprise web application I work on. (Don’t bother trying to read it. The point is it’s really, really long and looks really, really confusing to someone who doesn’t work on the back-end.)

How to Read Runtime Exceptions

Walking through this code, we have a Main class with one method called main. The main method sets a variable — a string called example — immediately to null. The method then sets a second variable — a char type variable called toArray — equal to the character array of the first variable example. The final line of the method attempts to print the number of characters of the second variable toArray.

When we attempt to run this code the following exception is thrown in our console.

A NullPointerException is thrown because it’s not possible to convert a null value to a character array. Our app dies before it even gets to the print line statement.

Now let’s take a closer look at the exception itself. Generally, you should read exceptions from the top down. The first line will tell you what type of exception was thrown. In this case it’s a NullPointerException, which is a type of runtime exception.

From there, continue down until you see a line that looks like it references your specific application. In this case it’s the second line that references our Main.java file.

Now we know where to look in our repository to find the code causing the error. And even though we may not know how to fix the code, we at least have a better idea of why the error is occurring and can confidently communicate the issue with others.

Note, one of the nice features of most modern integrated development environments, like IntelliJ here, is that the exception displayed in the console will provide a link directly to the line of code that caused the error. In other cases, like when the exception is received via email, I’ve found the easiest way to navigate to the line of code causing the error is to do a search on the method, class or file name.

Let’s go back to that intimidating exception email and take a closer look at it now that we know the basics of how to read an exception.

On the first line we see that the exception is a LazyInitializationException, which is a particular type of runtime exception thrown by the Java framework being used, called Hibernate. Looking at Line 7 we see the first reference to our specific application. From that line we now know that an error occurred on Vendor.java at Line 167, which can be found in the getActiveVendorUsers method in the Vendor class. We know we can find the Vendor.java file in the model directory, inside the domain directory, inside the com.verilogue.logueworks package.

So what about all the other text in the exception? I think it’s there just for intimidation. In my experience, if I can’t figure out the cause of the exception in the first couple lines of the stack trace (that’s what all that text in the exception notice is called) I’ll scroll towards the bottom and look for a line that starts with something like “Caused by” or a line that doesn’t start with the word “at”. I think when you get to this point you’re looking at nested exceptions. Don’t quote me on that though. I still have a lot to learn about Java exceptions.

But I definitely felt like I leveled up when, instead of asking the back-end guys on my team to look into the bug I found (and possibly created), I was able to read and understand the exception, find the code that was causing it and fix the issue all on my own. It’s an empowering feeling. It gave me confidence to experiment with new ideas, where I may not have otherwise, because I knew that if I broke something I’d be able to figure out what I broke and how to fix it without having to bother anyone else for help.

Of course, the number of different exceptions you may run into is plentiful. To this day I receive exception emails whose meaning I can hardly understand. However, with the limited knowledge I do have of what exceptions are and how to read them, I’m usually able to at least tell how critical the issue is, where the issue is occurring, whether or not I did something to cause it, and who I need to follow up with, if anyone, to make sure the issue gets resolved. Hopefully having read this article now you can, too.