“I get an error that says: ‘PowerPoint cannot insert an audio from the selected file. Verify that the necessary codec for this media format is installed, and try again.’ I’ve tried on two different computers and I can’t get the audio file to play. Have you ever run into this before?”

Yes. I get this question all the time. It comes in various forms. How do I open this file in Audacity? Why can’t Windows Media Player play this file? How come I can’t play this recording I made on my phone on my desktop? In fact, the reason I’m writing this post is because I hear this question so frequently that I want to have a resource I can point people to that will help explain what’s going on.

It can be puzzling for sure. The problem: you have an audio file with an extension that’s ubiquitous, though none of the software you have can open the file, but you can open other files with the same extension. So what gives?

Knowing the difference between audio codecs and containers may help you resolve your issues.

What is an audio codec?

An audio codec is a process by which an audio file is compressed and decompressed. A codec specifies how audio data should be encoded and decoded, which is what allows the data to be edited, saved, transferred and played on various devices. Think of a codec as a key. When data is encoded, or changed from one format to another, a codec is used to lock the data into a pattern; when data is decoded, like when you play an audio file, a codec is used to unlock the data and describes the pattern in which it was stored so that it can be reconstituted.

What is an audio container?

If a codec is a key that locks up data, a container is the box in which data is stored. A container can also be called a format. Whereas codecs are more mysterious in their presentation, a container can be recognized more easily by looking at a file’s extension. MP3, for example, is the file extension for the MPEG-1 Layer-3 audio container. (If you’re curious, the “MPEG” stands for Motion Picture Experts Group, the organization that maintains the standard; the “3” refers to one of the sections of the standard that specifically covers audio encoding. Check out more tidbits and talking points at the bottom of this post!)

There are two key points to take away from what we’ve covered so far.

First, recognize that there are dozens, if not hundreds, of codec/container combinations possible. Just because your media player can play one MP3 file doesn’t mean it’ll be able to play them all. The key is the codec. If your device and/or software doesn’t recognize the codec, you won’t be able to unlock the data.

So how do I resolve my issue?

For the technically inclined, the first step is to figure out what is the codec in question. I like to use the FFmpeg command ffprobe ($ ffprobe [options] [input_file]). This will print out the codec for a file and from there you can seek out the codec and install it on your device so the file can be manipulated. Or, if the codec is obscure and you just need to get the file into a format you can hand over to someone else, you can use FFmpeg to transcode the file to a more universal format. Have an audio file that won’t play in PowerPoint? Easiest thing to do is to re-encode the file as MP3, using a common codec to do the encoding. Windows Media Player won’t open your file? Convert it to a WMA. Pulled a CAF file from your phone? Convert it to an AAC.

For those not technically inclined, I have two software recommendations and a pro tip.

For audio playback, check out the VLC media player (free). In my experience there have been very few files VLC hasn’t been able to play right out the box. For audio editing or re-encoding, check out Audacity (also free). Again, it opens most files I’ve thrown at it without a problem. And those that it did have a problem opening, it provided pretty detailed error messaging, which made resolving the issue easier.

The pro tip addresses re-encoding files so they work with other software. Let’s say you have a MP3 file that you can open in VLC but for some reason can’t embed in PowerPoint. In VLC, click File > Convert/Stream… and a dialogue box should open that will walk you through re-encoding a file. Many media players have a feature that enables you to “save” or “export” or “convert” a file from one format to another, including iTunes, Windows Media Player and VLC. 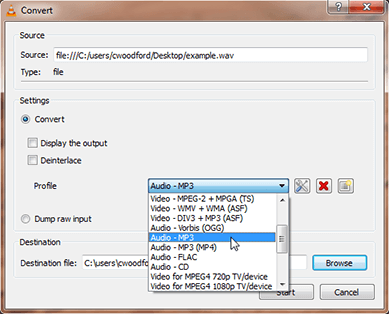 It’s relatively the same thing you can do with FFmpeg and Audacity, usually just with less precision or with fewer options. And it’s not uncommon to re-encode a file to the same type of file, e.g. re-encode a MP3 file as a MP3 file. This is often the quickest way to fix encoding errors that occurred in the original file and/or ensure your file is using a universally recognized codec. Just select the MP3 “profile” in your converter software and let it handle the rest of the details.

Of course, this is all assuming you aren’t working with a file that someone simply renamed from a WAV to a MP3. If that’s the case, good luck, you’ve got a much bigger problem to deal with.

Need a conversational ice breaker or something to wow the crowd? Try one of these.

WAV files are limited in size to 4 gigabytes, whereas, CAF files use 64-bit file offsets, eliminating practical limits. A standard CAF file can hold audio data with a playback duration of hundreds of years.

Typically, encoding goes from an uncompressed, raw source file format to a compressed format. Converting files in the other direction, from compressed to uncompressed, doesn’t improve audio quality. Encoding a compressed file to an uncompressed or lossless format cannot replace data that is non-existent, and it’s the data in an audio file that determines the quality of the sound. At best, the file will maintain its quality. But more likely, the audio will degrade a little each time it is re-encoded.

Still looking for more? Here are the most common links I share with people when helping them work through multimedia processing issues:

That’s it. That’s all I got. If you have more, please leave a comment.

One response to “Audio Codecs and Containers for Beginners”